Capitalism and War unleash human biology in recombinant and hybrid ways. In this sense the human begins to actively restructure itself. And, militaries and companies are the ones that are exploring such processes most intensively. Such invisibility begets all kinds of trauma, deformation, and amnesia-cal qualities in a species toto. It boggles my mind. This is happening. Much has likely already happened. The big nation states have only ever been war machines, no?

And corporations eased themselves into alignment over much of the last century. Corpor-national phenomena.

They are our militarily industrialized complexities, within which secrecy abounds

This evacuates and exhausts me. I suspect it exhausts those within and outside what we might consider to be the spectrum between secrecy and propriety. Secrets of trade and otherwise.

Our missing cores, our absent presences.

We, as a species, are dangerous. And we are self-destructing.

And its as if there is nothing we can do…this is what we are made of. This is the tissue, the latticework of ages. These last remnants of (en-machinated) language.

These gasps, if you will. #languageisleavingus

I repeat: This is a species that will be content to self-destruct, given it was functionally built upon machines of war, first and foremost. As we extend into the nucleus of not just the atom, but of the cell. As mere decades pass. (And to think we’re still here.)

I don’t want to be a part of it, for the most part. But here we are. This is what extinction feels like. And we are doing it to ourselves. #autocolonialism

Capitalism and War unleash human biology in recombinant and hybrid ways. This happens not in decades, but in years. #talesofthelatehuman

We are bound for it to be this way. We lead with our own complicity in all of it. This is the human, of late.

We are the extinction event.

(Make of this word and brain salad what you will. Words fail me.)

A thought. Please indulge me.

CRISPR is derived from a bacterial mechanism that provides immunity from viruses by using RNA to cut and paste snippets of the viral attacker into the genetic code of the bacterium itself.

There are large scale endeavors to use genetic editing strategies to engineer responses to actual viruses. The arguments for expediency and exigency abound.

That these things come into our knowledge and come into technoscientific existence so quickly —seemingly all at once—- makes my brain hurt.

This is all happening so fast, my friends. Much of it in less than a decade. And even that short time scale seems to be compacting upon itself.

A species expands asymptotically, no longer what it thought it was, unbecoming in media res.

Or so I tell myself. #talesofthelatehuman

Accelerators and accelerants, recombinant and chaotic. Synthetic life emerges from this bacterial animal which, having colonized everything, learns to colonize anew. It grows, it devours, it blooms, it dies. But not without giving birth to other forms of life, intentionally and otherwise. The Xenobots arrive.

I’ve lost interest in maintaining anything other than spoken voice—presence. Writing seems like failure.

The rate of extraction of our linguistic domains, written and spoken, feels like extinction to me. Nothing else. Those at the top, we apex predators, best flee the earth or hack our own genomes and biomes to give ourselves, up and over, to other possible worlds, living and dead. We at the top are the most precarious of all. This is what I like to call autocolonialism. (“We do it to ourselves, we do.”) Naming it, defining it, giving it shape and form in language seems to do nothing more than extract further the value of whatever resistance might be articulated, rendered, voiced. I feel as though language is leaving us.

“It wears him out” 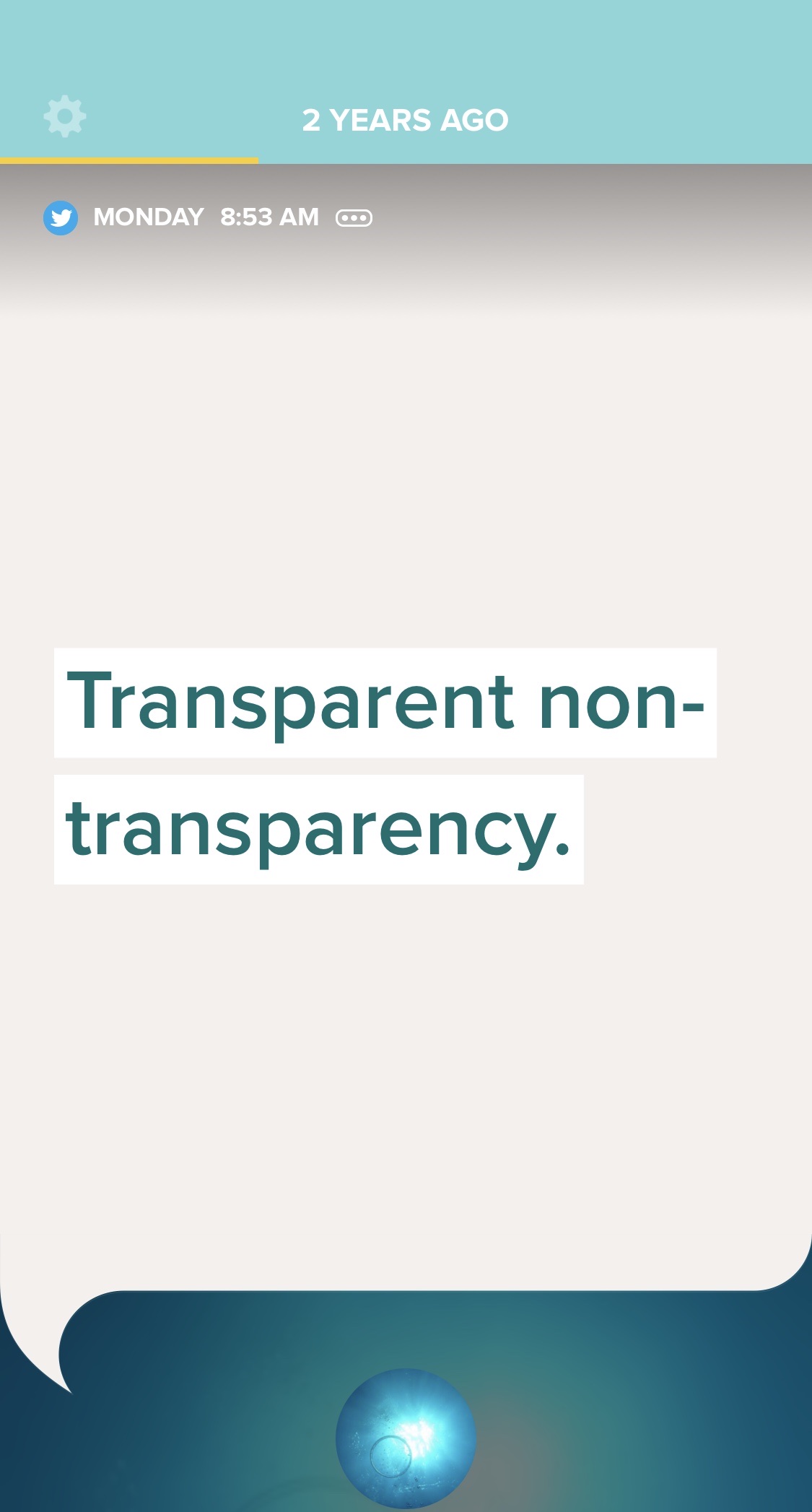 “If we now ask whether the human species can be considered a good or a bad race (it can be called a race only when one thinks of it as a species of rational beings on earth, compared to those rational beings on other planets, sprung as a multitude of creatures from one demiurge), then I must confess that there is not much to boast about. Nevertheless, anyone who considers human behavior not only in ancient history, but also in recent history will often be tempted to coincide with Timon’s misanthropic judgment, but far more often and more to the point, he will coincide with Momus, and find foolishness rather than evil the most striking characteristic of our species. But, since foolishness combined with traces of evil (when it is called madness) cannot be ignored in the moral physiognomy of our species, it is obvious from the concealment of a good part of our thoughts, which every clever person deems essential, that everyone in our race finds it advisable to be on his guard, and not to reveal himself completely. This behavior betrays the tendency of our species to be evil-minded toward one another.” Immanuel Kant, Anthropology from a Pragmatic Point of View (1798)

“Was a story selected for its statistical prominence among news organs, or because a personalization algorithm picked it out for us? If the selection was based on statistics, then which statistics—the number of mentions of the story, the authority of the news outlets promoting it, or something else entirely?” Frank Pasquale, The Black Box Society (2015)

Newness begets what we have found: nothingness. We could never be present in such expectations of a future, predicated upon nearly instantaneous forms of obsolescence.

The past and future enfold upon this non-existent now; a now which is forgetting, forgotten. Gone. Absent: Present. The late human sleepsasleep, wakesawake, shuns extinct, shuns.

We thought we were human as we consciously passed the ghost of ourselves onwards. 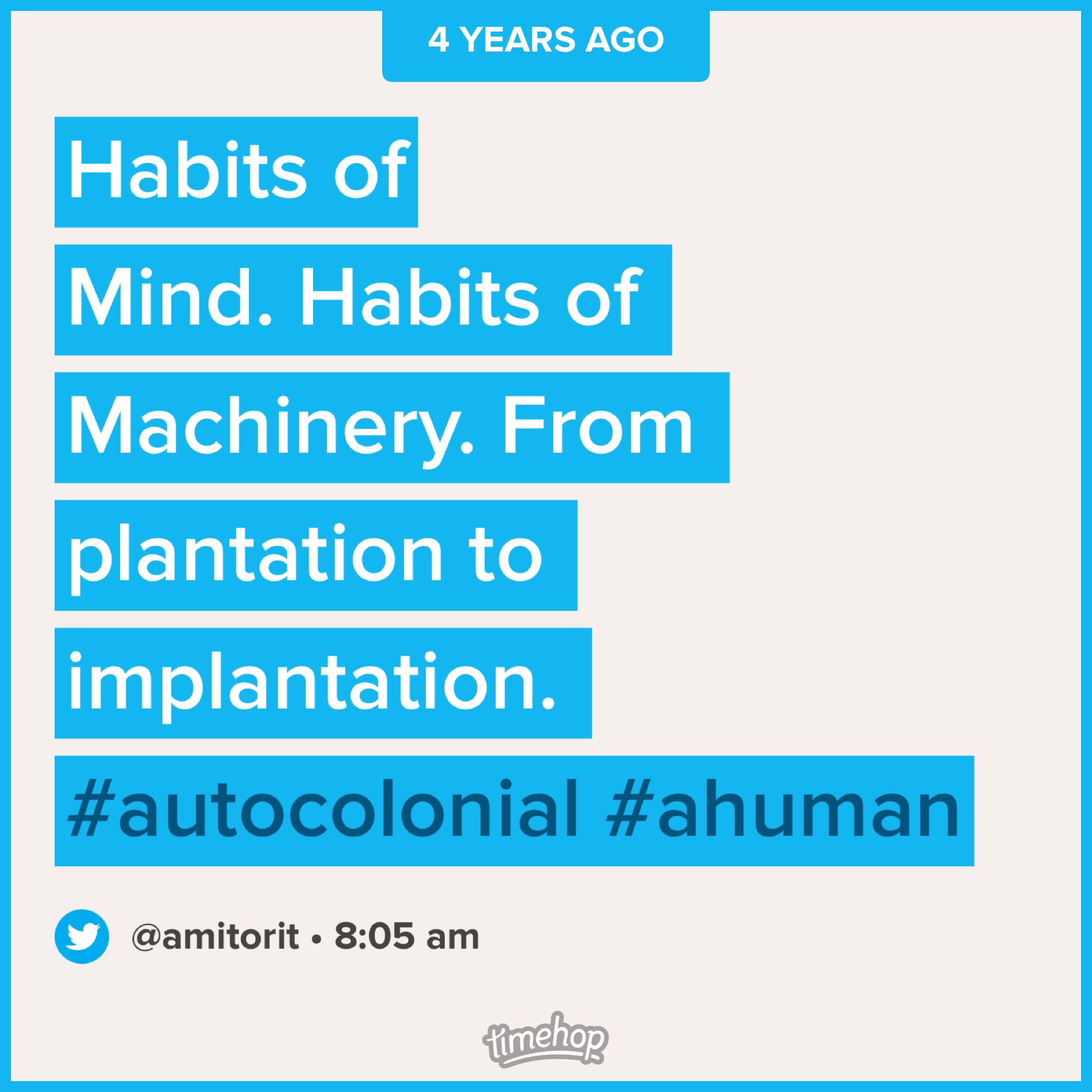